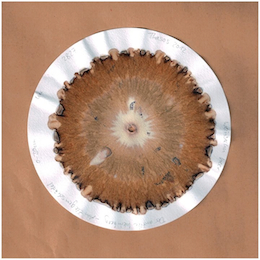 the chroma soil test provides statements about the ecological status of a soil and its humus quality. We achieve a high fertility of a soil not by mechanical tillage or mineral fertilizers, but rather by the component animal which disappeared completely from agriculture in recent decades.

Chromatography describes the separation of mixtures, in our case, a soil solution, developed by absorbation and binding effects on an exposed filter paper. Thus, each winemaker can produce a footprint of his soil all by himself. This chemical and scientific procedure adds one more method of an image generating soil quality analysis.

The chroma of Kazaviti (Thasos) comes from our “mother earth” Boula’s Vineyard, which was planted in 2014 with 800 vines. Previously, we analyzed a high enzyme activity and very good colloidal humus. The soil has an exceptionally loose crumb structure, good ventilation properties and sufficient nitrogen reserves. This soil has never been treated with herbicides or with mineral fertilizers. A treasure that enjoys rarity status within the Anthropocene era.

after the pressing operations the white and red wines present themselves as from another world of enjoyment. An essence in flavor and aroma, spicy yet fruity, a novelty, because completely forgotten. History repeats itself.

In this case, the Germans were the teaching men to the Romans. The ancient vinification methods in huge clay pots and the transport of smaller clay vessels by the Roman Empire was impractical. Wines in oak barrels and the transportation of those barrels replaced the costly production of antiquity.

Especially thassonian amphora wines traveled widely back then. The fragments of the signet: Thassos, scattered from the Balkans to Egypt and Israel, as far as India – a commodity of the highest order.

The old masters of winemaking were no longer to be found on Thassos. To understand the vinification of the wines in the Kioupia here in Germany as a test run, has proven itself towards the adaptation of new knowledge which is now applicable to Kazaviti. After nine years of active production of ancient wine, weinserien. is hereby complemented by another facet. 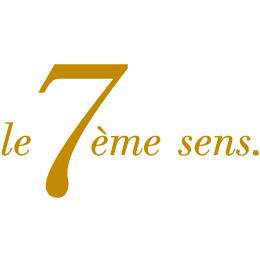 are known to everyone. To those who are still looking for the “Seventh sense”, we can help you now! The refined traditional bottle fermentation sparkling base wine comes from the Rheingau. Riesling, of course. How could it be any different?

Only healthy grapes, fractional Cremantpressing, delicate oak aging and malolactic fermentation are the cradle of this sparkling.
After 13 months of homogeneous tempered bottle maturation the first tranche of sparkling wines was disgorged in October 2013 – the second fraction of 300 bottles after 26 months. But the filling dosage remains to be the last mystery… 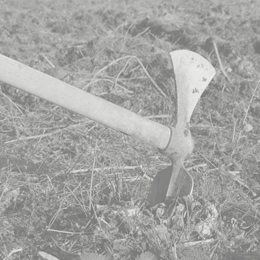 to follow. Here again the start of 2012 in Kazaviti, Thasos. The surprisingly large global feedback delighted and very much endorsed us in our doing. For this reason, moving images will document the progress of the weinserien. activities in Greece and beyond.

The weinserien. team deploys to its next assignment beginning September 2013. Along the trail of Phoenician terrace culture and with the focus on the historic vineyard reactivation the conditions for 2014 are created. A functioning fence system along with irrigation installation and tillage for the coming year is in our sights.
The “mother earth ”of once salvaged slips will be planted in March 2014. Grafted on American rootstock, the first vineyard will be planted with around 700 autochthonous vines.
The saga continues… 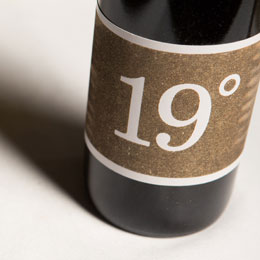 is the unorthodox USP of weinserien. With an incline of 19° and over thirty year old vines, at an average altitude of 250 m above sea level, this vineyard is always harvested late in October. The vineyard site “Hallgartener Wuerzgarten” literally produces spicy wines. This was the reason, for weinserien. to plant an additional 1,500 squaremetres of Riesling to an already tilled and cultivated Riesling plot on 700 squaremetres, in 2013.

At approximately 1,500 square meters the average yield is two barrels per year. Currently the 2011 vintage is bottled. For wine enthusiasts, who already know it all a nice alternative to the omnipresent, contemporary pleasing savoriness.

and is not performed by the winemaker. For this reason, considering the challenging year 2010, the procedure was to deacidify the wine invariably via malolactic fermentation to obtain harmony and density over an extended period in oak barrels.

A new wine is born – an exotic form of Pinot Noir. Pinot Noir vinified like white wine, bottled biologically stable after three years of sedimentation and three racking procedures. It is the white wine which is still sealed with a natural cork, of course.

there is the vineyard with the area identification number 27.380/381, the youngest in the weinserien. portfolio and yet the oldest small batch series. Planted in 1958, this slow growing Riesling clone is located in a steep slope that misses its equal in the Rheingau area. Riesling grapes get downright baked on the weathered slate of the Taunus.

With a slope of 25° (45%) of this Grand Cru terroir is awarded with one of the best microclimates of the Rheingau. Located directly on the city of Wiesbaden, this small idyll can only be tillaged via wire hoists. This requires serious craftsmanship at the highest level, which means: one hand for oneself and one hand for the care. It is an annual challenge that justifies any effort.

The rare Aesculapian rat snake resides again at the foot of the old Mühlberg. She is an indicator and proof of a healthy ecosystem and on an outstanding inclination of the sun. The considered to be almost extinct Weinbergsblutzikade (Cercopis vulnerata) feels at home again there after two years of transitioning to sustainable standards. By eliminating alternating herbicide procedures, the essentially important mycorrhizae stabilized again as well. A mystic place.

With this Riesling, which is limited to 600 bottles, local terroir manifests itself in a special intensity.

this vineyard is located at approximately 230 meters above sea level and is facing to the south. At the vineyard site “Hallgartener Hendelberg” this vineyard was planted in 1978. Thanks to slight annual precipitation, vital soil and incessant, relentless wind movements the grapes ripen to a dense, extract-rich crop.

For the red wine beginners this wine promises uncomplicated pleasure, even when chilled slightly. Two years in oak barrels and a Francophile interpretation, forms the foundation of the 515.15 wine series. 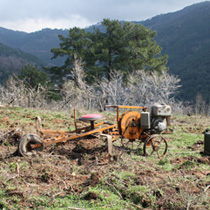 Spring arrived a few weeks ago. After enduring the long winter months in Germany this is a good reason to go travelling again in March.

Surrounded by a surprisingly untouched nature with smell of incipient blossoms of a various fruit bearing trees, rambling terraces and a magnificent view to the sea 5 km away and to the snow-capped Pangajon Mountains on the mainland, our viticultural revitalizations are constantly moving forward…

Working with various clearing equipment and elbow grease, our team which is five in numbers, has resumed its work for 2013 to do further groundwork for new plantings on best humus soil in a preferred climate.

After last year’s reclamation of 300 autochthonous vines of Limnia, Agriostaphila, Jeri and Matriaki – all at least 90 years old – and along the thriving seedling multiplication, many challenges arise. 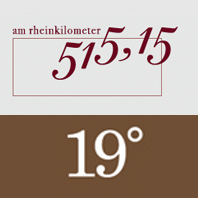