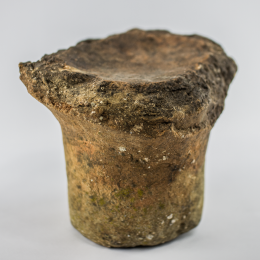 obligation to a higher demand – in 2004 Alexander Heer developed a project to reactivate old and lost European “vineyard treasures”. After a traditional winemakers apprenticeship, while studying oenology he defined his personal “mission Antique Viticulture”. The parameters for this were favourable. During his research as a technical writer for wine and food in a Publishers office in Wiesbaden, his attention was caught by an old book title. These culinary fragments of Roman publications stood out from the usual.

The temptation was big to transfer this old identity of taste in his own vineyards. Nowadays he manages the vineyard areas in five European winegrowing regions. With the Rheingau and the Greek island of Thasos, Heer now links projects. He connects and defines the modern and the ancient to a new profile.

In many places vineyards lie fallow nowadays, mostly by the lack of technical cultivation means. But it is these old steep vineyards considered to be the untouchables by modern man’s hand, which are being reactivated by him.

But before he wants to discover “the vineyard” as such for their wines taste, he performs extensive soil analysis. The soils with the lowest amounts of former artificial fertilizer treatment, herbicide and pesticide contents are hereby the most important. Because in those the natural and unique flora and fauna has the best chances to return and to recolonize.

“The magic and the ability to produce an exceptional wine, I see mostly given by organically cultivated vineyards. The pursuit of good craft and the production of 100% organic goods has become my passion. ”

The resulting wines reflect this followed maxim and manage to give birth to a wide diversity of species in the form of wine. In each of Heers small series, the characters and varieties of individual regions are found.

Wine as a solid craft and cultural landscape protection – The generation of his interpretations of white and red wines are concluded as small series in stainless steel, oak and Kioupi.

The wines produced under his hand are far away from the mass phenomenon of todays styles in winemaking, therefore not intended to please everyones gusto, but allowing the connoisseur who is looking for one or another variation, to see and taste old yet new nuances and aspects in wine.